The Definitive Ranking of the Best Cop TV Shows

Cop shows have been captivating the public for decades. And who can blame them? Everyone wants a peek into the thrilling and shocking interactions cops have on the job. From the comfort of your home, a good cop show lets you see the dangerous chases and incredible detective work without putting yourself in harm’s way. And we have created a list of the best of the best for you to make sure there isn’t one you’ve missed. So sit back and fire up the popcorn!

Air Dates: 1991 – Current TV.com Rating: 8.2/10 Number of Episodes: 1,050 This list would be severely lacking if we did not mention COPS. As one of the longest-running television programs in the U.S., the people have spoken, and they can’t get enough of COPS. The show runs as 30-minute episodes, usually with three segments within an episode. The show is not scripted and follows police officers as they go about their day. Nothing feels more raw or behind the scenes than this show if you wish to get a closer look at the real life of a police officer. We would dub this show as the reality tv show that you want to watch.

Air Dates: 2002-2008 TV.com Rating: 9/10 Number of Episodes: 60 A show that, despite finishing several years ago, still holds a strong fanbase. A quick google search of “The Wire” produces several articles discussing how The Wire is the best television (not just cop) show ever, therefore earning the #2 spot on our list. 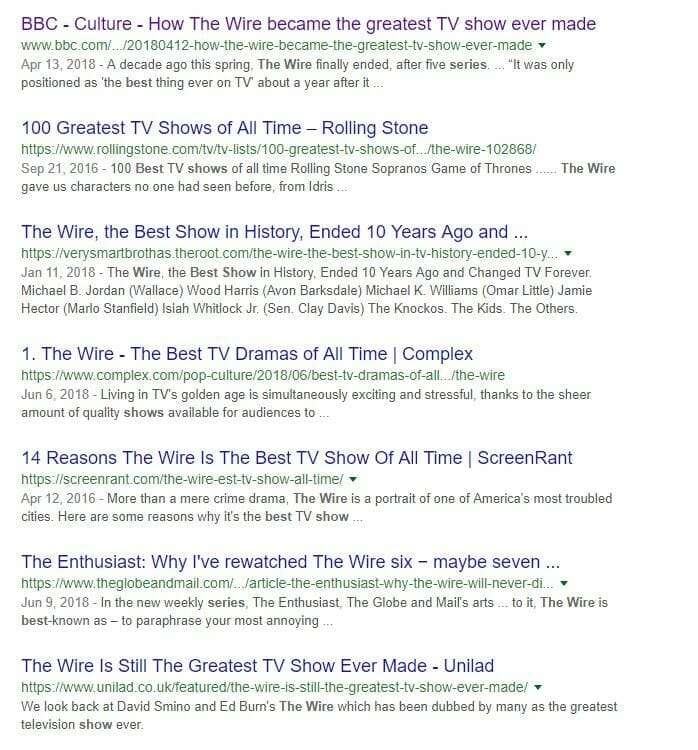 The Wire follows Jimmy McNulty, a detective of the Baltimore PD, who constantly disobeys direct orders from his superiors to pursue his own hunches and cases. What makes this show stand out for its audience is its social commentary that was unapologetic and in your face. HBO was able to create this effect because the show’s writers, David Simon and Ed Burns, “had worked in Baltimore’s police department, and in the case of Burns, as a school teacher too – so the writing was grounded in reality.” Each season tackles a different issue that ties with law enforcement. In chronological order, the seasons tackle: “the illegal drug trade, the seaport system, the city government and bureaucracy, education and schools, and the news print media.”  While not a light-hearted show, The Wire remains a HBO classic for its great production value and unique story-telling approach to the show.

Air Dates: 1975 – 1979 TV.com Rating: 8.8/10 Number of Episodes: 93 This show follows the unlikely duo of street smart David Micheal Starsky and intellectual Kenneth Richard Hutch. A classic that inspired movie spin offs and a video game, even Millennials know about this iconic power duo. Set in the late 70’s, Starsky & Hutch solved crime but also introduced viewers to “west coast America, cars, impossibly beautiful girls, leather [and] denim.” Don’t forget about the iconic supporting characters: fashionable informant Huggy Bear and “Snowstorm,” Starsky’s two-door Ford Gran Torino. The show had a light-hearted feel to it and was enjoyed by all ages. This show was different from other cop shows as the famous duo had a strong relationship – they did not back away from hugs or declarations of friendship. In an article entitled, “My Favourite TV Show: Startsky & Hutch,” Sam Wollaston wrote, “it was also about friendship, a sort of male friendship that I’ve never come across … jokey on the surface but genuine underneath.” This cop show may have been one of the first to really show how important and strong the relationship is between law enforcement partners. Your partner is someone you are trusting with your life, and that is shown clearly with Starsky & Hutch.

Air Dates: 1968-2003 TV.com Rating: 8.4/10 Number of Episodes: 69 Columbo is one of those shows that, when it was on the air, every household watched. With the show being broadcast in 44 countries, clearly there was something in the show that appealed to everyone and everywhere. It is worth noting that Columbo has several notches under its belt, including:

Columbo is an easy-to-love character whose trademark is always having “one more question” when conducting an interview with his suspect. This show is easy to watch, with interesting story plots. It is the perfect show to have running in the background while you cook dinner or working on your car.

Air Dates: 1984-1989 TV.com Rating: 8.6/10 Number of Episodes: 112 If there was one show that captured the 80s, it was Miami Vice. This show follows two undercover detectives, Sonny Crockett and Rico Tubbs, from the fictional Metro-Dade PD in Miami. The show was known for its stylish clothing, and the use of music and color in its filming style. While seemingly irrelevant now to how “flashy” a show is, it was a game changer at the time. “There’s probably no way to appreciate how special the show seemed when it first aired unless you were there at the time, and had been watching TV long enough to understand that even the smartest, best-written shows were going to look like mud.” This show transformed television, and raised expectations from the public on how television should be visually appealing. The episodes were sometimes based loosely on real crimes from the Miami area over the years. And while the show started very light, towards the end, the show’s mood turned darker and more serious. One of the episodes, “Out Where the Buses Don’t Run” was ranked #90 on TV Guide’s 100 Greatest Episodes of All Time.

Air Dates: 2014-Current TV.com Rating: 9.1/10 Number of Episodes: 16 This is another HBO show that makes the list. In the “new style” of HBO shows, the format of the show is an anthology crime drama. Meaning, that each series stands alone with its own characters and plot that do not connect to other seasons. The first season had several high-ranking movie actors cast including Matthew McConaughey and Woody Harrelson. The show has continued with this theme with season two casting Colin Ferrell, Rachel McAdams and Vince Vaughn. While season two has not gotten as much praise, season one instantly made True Detective a cult classic. What makes this show so unique is the brilliant acting, high production quality and powerful writing that makes you feel that you are watching an extended movie more so than a tv show. This effect is achieved by using an onslaught of movie actors and all eight episodes of season one being written by novelist Nic Pizzolatto. An article in Forbes described the show as “in many important ways, it’s like a feature film on steroids.” While we cannot vouch for season two, we recommend that at least everyone checks out season one. The first season follows detectives in Louisiana trying to solve a case with a serial killer that dates back to 17 years prior. Season two, set in California, follows three detectives in three different police departments investigating the crimes related to a murder of a corrupt politician. The third season is scheduled to come out in January 2019.

Air Dates: 1968 – 1975 TV.com Rating: 8.8/10 Number of Episodes: 174   It would probably be a crime if we didn’t mention Adam-12. A police series that follows two officers of the LAPD, veteran Pete Malloy and rookie Jim Reed. The show featured cases that were based on real crimes, ranging from serious to minor transgressions. The squad car was a central focus of the show, with some crediting Adam-12 making the black and white units of the time famous.  The show was said not to have solved crimes at the police department, but “through the windshield of their squad car.” This classic cop show is a must see for those who enjoy a good, old-fashioned crime drama that is wholesome and entertaining.

Air dates: 1951 – 1959 TV.com rating: 8.6/10 Number of episodes: 276 This classic has to be mentioned, starting off as a radio show, Dragnet moved onto television due to its massive popularity. The first run of the show aired from 1951-1959 but was revived from 1967-1970 . The show was revived another two times (1989 series & 2003 series) and three movie spin-offs were made (1954, 1966, 1987). The original show featured two police detectives, Sergeant Joe Friday and Officer Frank Smith, solving cases in Los Angeles. The show focused on careful investigative work, and popularized phrases such as “just the facts, ma’am.” This show holds true today as captivating and entertaining. The plot lines are detailed, and the characters are developed. We think it would stand up to anyone’s expectations today still.

Air Dates: 1988 – 2012 TV.com Rating: 8.4/10 Number of Episodes: 1,186   While not necessarily a “cop show,” we felt that we had to mention America’s Most Wanted (AMW). At the time of its cancellation, AMW was the longest running show on the Fox network’s history. The show used actors to reenact crimes of dangerous fugitives, go through the case details, and ask the public for help locating the suspects via a toll free hotline. The show has claimed that as of March 20, 2013, a total of 1,202 people have been captured thanks to the show. The show became a national pastime, with even the White House making a request that the show air a special episode featuring the 22 most wanted al-Qaeda fugitives after the 9/11 attacks. The show’s host also interviewed President Obama at the White House for its 100th episode. This show truly became a part of American culture for the 22 years it was on the air.

This list could go on and on, but here are a few more special mentions:

Let us know, do you agree with our list? Did we miss one? Have we made some grave error? We would love to hear your thoughts.