If you are in law enforcement or have an interest in public safety, you may have noticed the recent wave of cold cases being solved. In April 2018, police identified the Golden State Killer, after over 30 years on the run. Thanks to genealogy testing from companies such as 23andMe and AncestryDNA, cold cases are being given a breath of fresh air. When an individual uses these genealogic services, their genetic profile can have matches to unknown DNA in law enforcement databases. A DNA match allows police to narrow the suspect list to relatives of the original individual. The genealogical makeup identifies if the DNA is to a close or distant relative. This same process resulted in the June 2018 capture of a killer who murdered a young Canadian couple in 1987.

However, it is not just genealogy matching that is helping to solve cold cases. Police are embracing new methods and using them to their advantage to crack old cases.

Another case has made national headlines this past week. Linda Ann O’Keefe’s 45-year-old murder case was one that hung over the Newport Beach Police Department. Linda was abducted on July 6, 1973, when she was 11 years old. She was walking home from school and disappeared. Her body was discovered the next day by a cyclist. She had been strangled and left in a ditch.

Several witnesses had reported that they saw a young girl matching Linda’s description getting into a van approximately at 1:15 that afternoon. “The van was described as a 1969-1973 turquoise-colored vehicle of an unknown make and model, with windows on both rear double doors, no windows on the left side, and the license plate mounted on the left rear door. The driver was a male Caucasian, about 24 to 30 years old, with brown, curly, medium-length hair, small or droopy eyes, and a deep tan.”

More than 45 years passed, and the case was never solved.

In July of 2018, we all witnessed as Newport Beach PD brought a whole new form of attention to Linda’s case. With the case still cold, the department decided to revive it via their Twitter feed. They suspended regular activity on their Twitter account and took two days to slowly tell the story of Linda’s case, from Linda’s perspective.

You can read the tweets here. The hashtag used was #LindasStory. 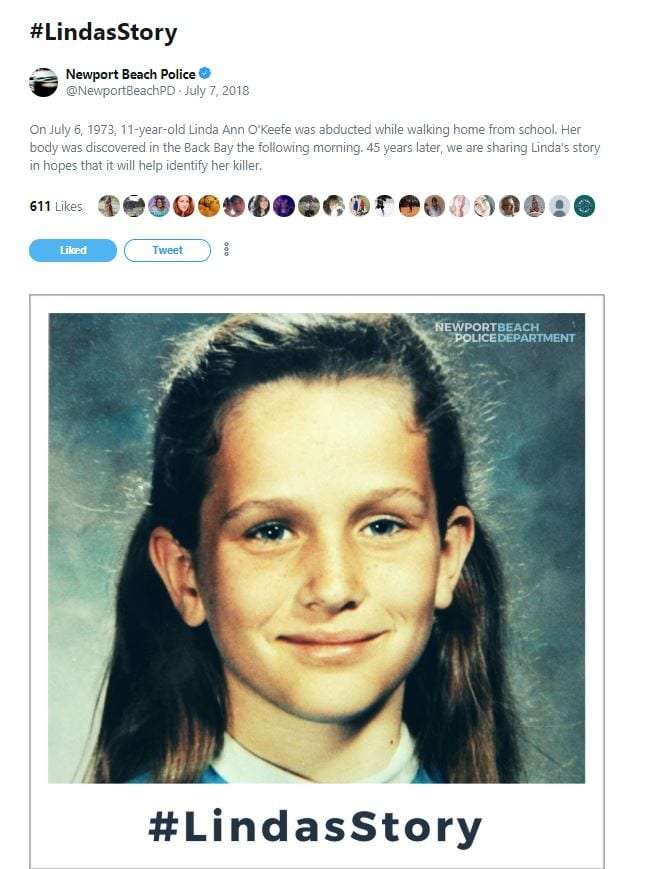 This innovative approach brought attention to a case that was too old to garner media interest on its own again. It was an inspired use of social media.

As the tweet-along revealed more details, users on Reddit and Twitter reported being hooked and wanting to know more.

The story ended with the Newport Beach PD sharing sketches of what witnesses had described the man looking like back in 1973. Using DNA that the suspect had left on Linda’s dress, the PD shared an aged sketch of what they believe the suspect would look like today. 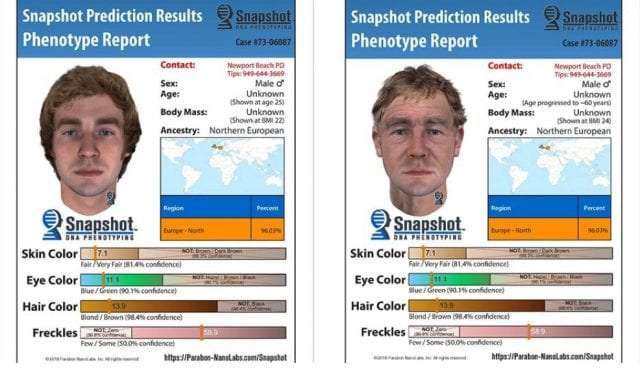 Newport Beach PD announced late on February 19, 2019 that they had arrested suspect James Alan Neal, 72, in Colorado. Genealogical technology helped solve this case, along with the hard work of Newport officers. The charges against James Neal are “special-circumstances murder because of enhancements for allegedly kidnapping and committing a lewd and lascivious act.”

The Newport Beach PD are a shining example of embracing technology to better police our communities. We have previously mentioned them in our blog post: Law Enforcement Agencies Doing Social Media Right.  They earned a spot on our list for their podcast “Countdown to Capture” which recounted another cold case. Newport Beach PD released the six-episode podcast in the hope it would help locate Peter Chadwick. Chadwick went missing while on bail for murder charges for his wife.

Newport Beach PD has a clear dedication to its cold cases. They are frequently finding innovative ways to bring media attention to cases that have ‘gone quiet.’ They are a leader in law enforcement, and we envision many other police agencies following in their steps with these pioneering procedures.