It is becoming more and more common for organizations to have a social media presence, including those in law enforcement and public safety. Being on social media allows you to connect with those that you serve, share “wins” from your employees, listen to feedback and gauge public perception of your organization. However, social media can also go very, very wrong. For example, when Cinnabon chose to promote their sticky buns by capitalizing on Carrie Fisher’s death. The internet did not react positively to this attempt to advertise a product in poor taste, and the company was forced to take down the post and apologize for their insensitivity. 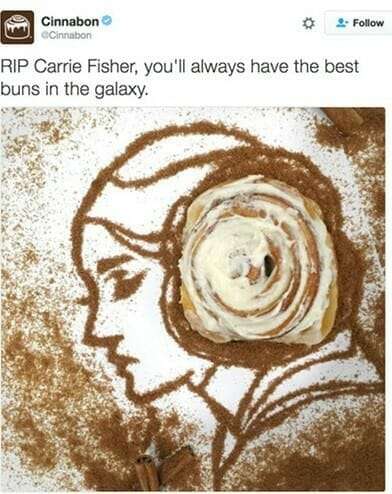 Another example came from HMV, a British company, that laid off dozens of people in one day. Unfortunately, they forgot to take control of their social media accounts from their employees before doing so, so the employees began to live-tweet the entire situation. 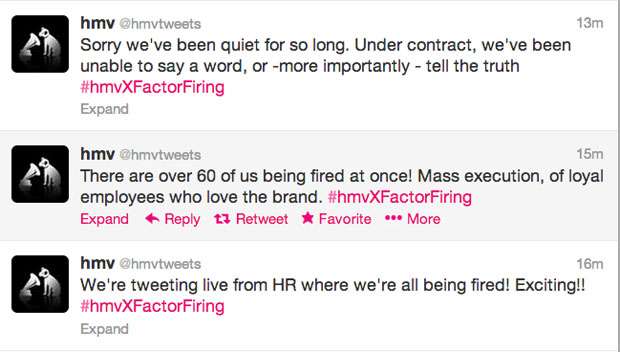 The lesson here? There are basic rules and methods to consider before posting any content online. You should keep in mind how people will react. Is there a possibility of people being offended? Could your post be misinterpreted to mean something else? As a public safety organization, is your post violating any internal rules?

Well, we have mentioned the bad, ugly and unbelievable. Time for the good. There are dozens of public safety agencies that are absolutely dominating on their social media profiles and paving an example for others. As InTime follows numerous agencies across the US and Canada on social media, we have pulled out some examples of a few key accounts that deserve a shout out!

Twitter is probably the most heavily used social media platform by public safety agencies. It is a great place to tweet out information to the public about road blocks, missing persons, blazing fires to avoid, released inmates to an area, and community involvement opportunities. However, Twitter can be so much more than that. It is a place to build a relationship with the community you serve. Who is doing this best in our humble opinion? Pasco Sheriff (@PascoSheriff) is one of our favorite accounts to follow on Twitter. 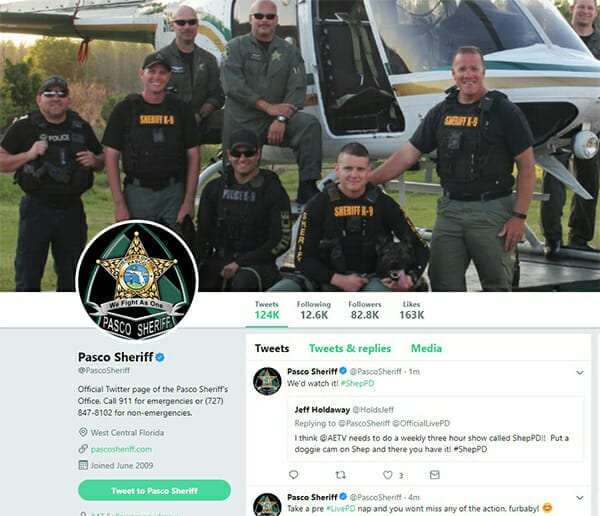 1. They respond to their followers, and with thoughtful messages:

2. They sell merchandise for their fans! 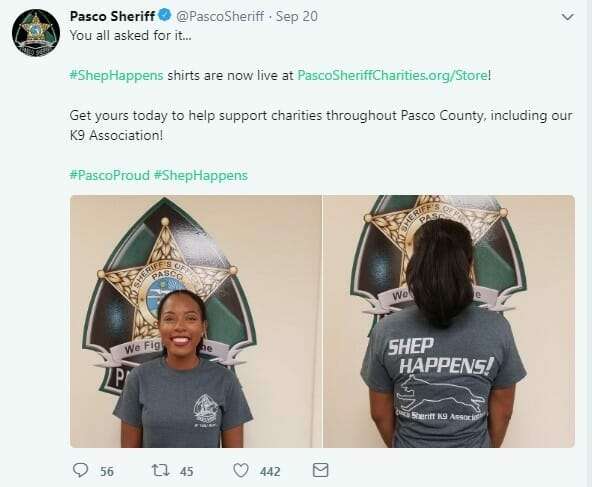 3. They give back to their community – going above and beyond the job description! 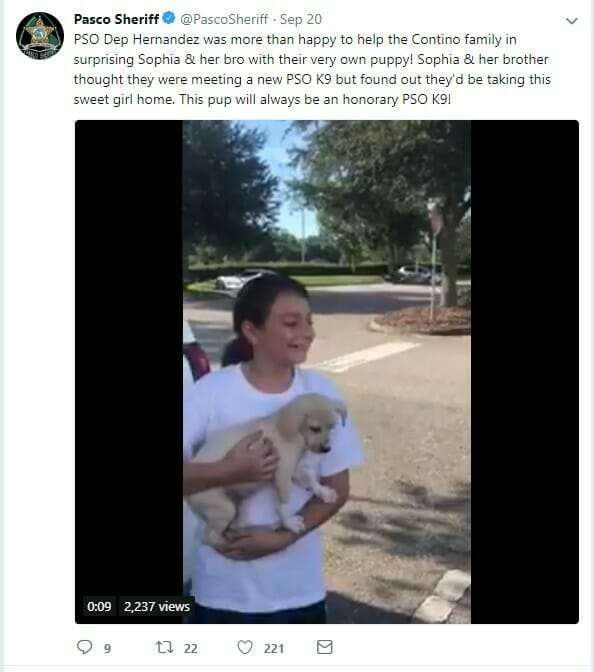 We recommend you give them a follow, you won’t be disappointed! And other agencies, take note, this Sheriff’s office is the example to follow!

Facebook is another popular site for law enforcement agencies. It is a great platform to make announcements, post videos and create events that you are hosting. As of the first quarter of 2020, Facebook has over 2.6 billion monthly users. There are many agencies that have made an active commitment to their Facebook pages, but one that stands out in our feed is Georgia Department of Corrections.

1. They participate in Facebook Live videos, with relevant and high-quality video content. Live videos are a feature that still not a lot of organizations have taken advantage of so there is a special shout out to Georgia DOC for adopting the innovative technology. However, live videos should not be ignored, as 82 percent of consumers are reported saying that they would rather watch a live video to reading a written social post. 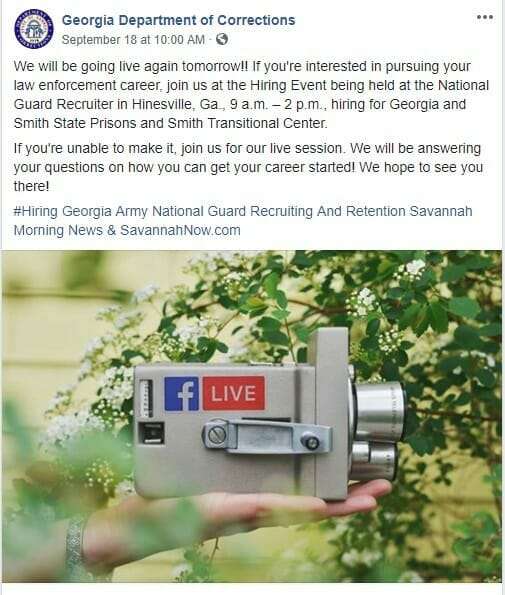 2. They use the platform as it is intended. Rather than just make a status about an upcoming event, they create the event on Facebook so that they can generate interest and track attendance rates! 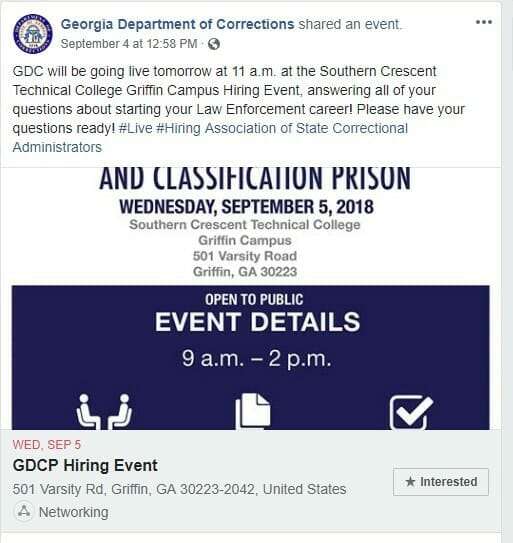 3. They cross-promote their other social networks. If someone is following you on one social platform, chances are, they would be willing to follow you on others. Georgia DOC mentions their other platforms frequently on their Facebook to increase their follower rates overall. Also, we are very impressed that they are on Snapchat! We don’t think a lot of public safety agencies have made this leap just yet. 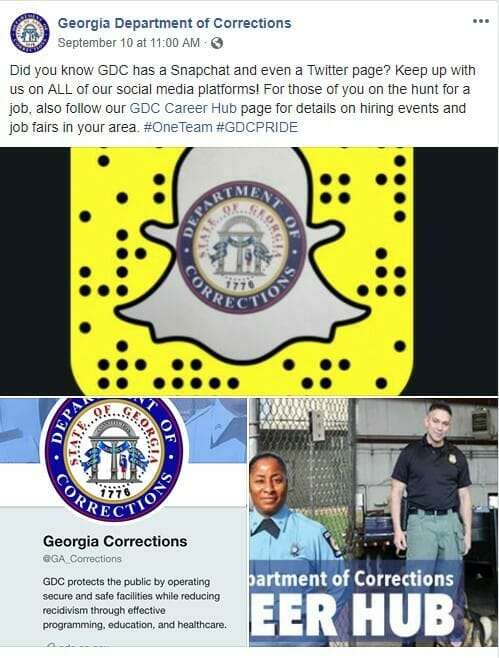 YouTube is a continuously growing social platform, and one that can be harder to participate in. Making videos can be challenging – the video must be both entertaining and high quality. As of 2020, YouTube is the most popular social media video platform with over 1.9 billion monthly users. So, the pressure is on! There are a few accounts that stood out to us as making a good impression on YouTube.

The Fort Worth Police Department has released several videos on their YouTube for recruitment purposes. The videos are all lighthearted and serve to showcase the fun side of the PD.

Fort Worth PD made a series in which they played on a Star Wars theme to promote police recruitment. See the videos here, which include : Chewbacca joins Fort Worth Police, Boba Fett helps Fort Worth PD and Darth Vader FWPD Interview . A particular video, FWPD Stormtrooper Police ‘Recruit’, was so good it was picked up and mentioned in an article about national police recruitment concerns by The Economist. It does not end at the Star Wars theme, check out the Batman video too. We don’t know if these videos have increased applications for the department, but we sure would apply! 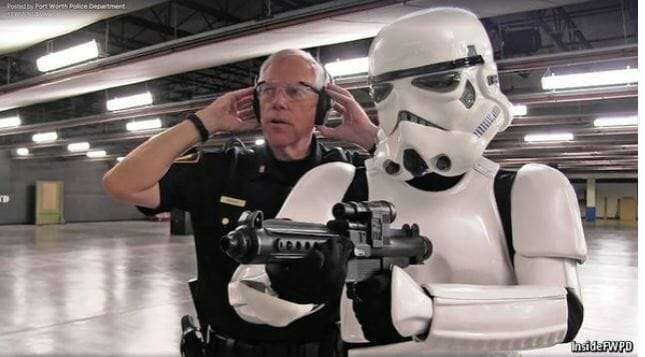 Miami PD is another agency that is incredibly active on YouTube, producing a lot of video content. They release vlogs on their channels, with the current count being at 24 vlogs!

Miami PD’s vlogs follow their police officers on their shifts, show casing what they do day in and day out. Vlog 8: Ultra Music Fest 2016 takes viewers through an officer’s day patrolling the famous festival that brings tens of thousands of people into Miami. Officers must remain alert for drug use, fights, and remain responsible for the safety of the crowd. These vlogs help the community understand all that the Miami police do and shows that cops are relatable, funny and helpful. And, the videos are clearly working –  with over 16 million views and almost 165,000 subscribers to the channel. 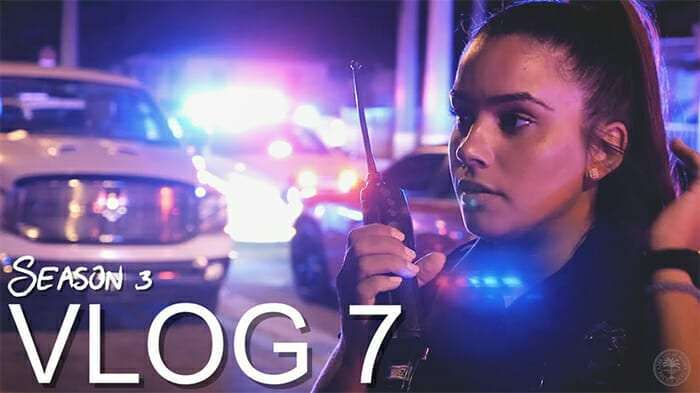 Instagram is probably the last social media channel that comes to mind for most public safety organizations. However, it is definitely one to keep in mind as it is still one of the fastest-growing social media platforms in 2020. Instagram is more restrictive in how you can interact with your user base – with mostly photos and short videos being the main form of contact but that does not mean it is one to skip.

Showing their police officers working out

While not a social media platform, podcasts are another way to connect with your audience. It was found that 55% (155 million) of the US population has listened to a podcast – up from 51% in 2019. And we want to give a well-deserved shout out to Newport Beach Police Department who realized the popularity of podcasts and has ingeniously used it to their advantage. Newport Beach PD announced in September 2018 that they would be releasing a 6-episode podcast called “Countdown to Capture,” that follows the cold case of millionaire Peter Chadwick, who is suspected of murdering his wife in 2015. Peter disappeared while out on bond and officials hope that the podcast will spread “awareness about the case, that someone will hear and aid in bringing Chadwick to justice.” This innovative approach to crime solving may be the way of the future, and Newport Beach PD is paving the way here! You can listen to the podcast here. 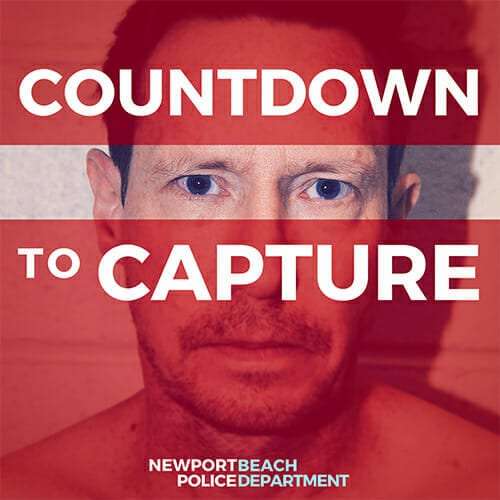 Overall, being a step on social media is the right step for most organizations. Don’t have anything nice to say? Better to say nothing at all. And if you are still lost, look at one of the several accounts we mentioned in this article. They are setting the best example of all.